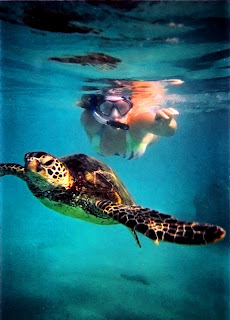 Here is a picture from our honeymoon – we were snorkeling in Hanauma Bay on Oahu, Hawaii. That is Jodi swimming behind a sea turtle. It was amazing! If you’re ever on Oahu, you have to stop by Hanauma Bay, but get there extra early because the crowds can get pretty big.

» Personal » Hanauma Bay
On May 11, 2007
By David Champagne Photography

This site uses Akismet to reduce spam. Learn how your comment data is processed.